Doom Crop is a strategy game for two players, using a standard deck of playing cards. 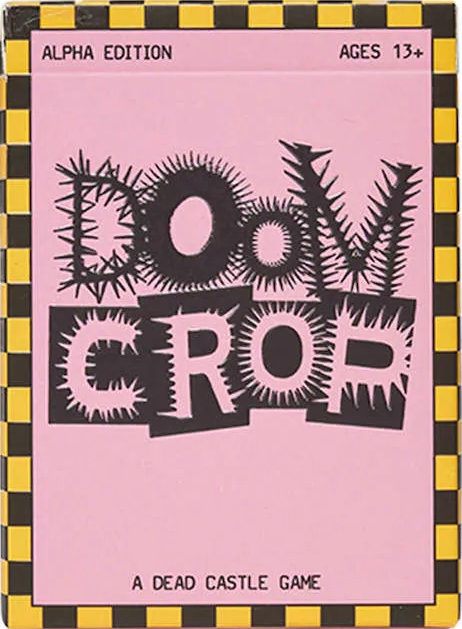 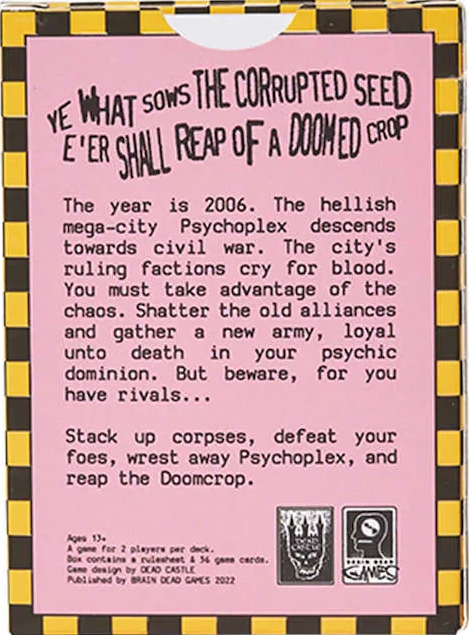 1. Shuffle the deck and deal each player 10 cards facedown.

2. Look at your own cards, but do not reveal them. Choose 9 of your cards and arrange them facedown in a 3-by-3 square. This is your Grid.

3. Set aside your 10th card. When both players are finished building out their Grid, reveal the card you set aside. Whichever player's revealed card has the lowest value, goes first. In case of uncertainty, flip a coin.

4. Keep your revealed card in its own area; as you capture cards throughout the game, you will place them on top of it to form your Discard Pile.

5. Place the remainder of the deck facedown between players. Both players will replenish their Grid from this shared deck throughout the game.

Each player has one Action they may take on their turn. Choose one:

Reveal: Flip one card in your Grid face-up.
or
Sacrifice: Choose one of your own face-up cards, place it in your Discard Pile, and replenish it from the top of the deck.

After you take one of these actions and resolve any combat or ability that results, your turn is over.

When you Reveal a number card, your opponent must reveal the card in their Grid that is directly opposed to it (as if the two Grids mirror each other).
If the opposing card is also a number, compare their values. With some exceptions, the higher number wins this combat. The winning card remains face-up in its Grid. The losing card is captured to the winning player's Discard Pile. In case of a tie, both cards remain face-up in their Grid.
If the opposing card is a face, combat does not occur. With some exceptions, both cards remain face-up in their Grids.
Combat Exceptions: a #2 always beats a #10 or any face card. If either number card in combat is a Heart, check if the Hearts Suit Power can be activated. Any number card may capture a face card in combat if they having matching suits.

When you Reveal a face card, activate the Ability associated with its face. After this Face Ability is completed, you must Sacrifice the face card to your own Discard Pile.

When the deck runs out, immediately sacrifice all of your own Face cards, both face-up and facedown. Then reveal all your remaining cards, and resolve combat between all opposing cards (including ones that were already face-up). If you have any cards left after this mass combat, capture your own.

Count out the amount of cards in your Discard pile. Card values do not matter, but remember to count Diamonds as two cards. Whosoever has captured the most cards, wins!

Spades: Once per turn, before you take your action, you may sacrifice any one Spades card in your Grid, face-up or facedown.

Clubs: When you reveal a Clubs number, you may choose any card any card adjacent to its opposing card to do combat with, instead of its directly opposing card.

Diamonds: When you count out Discard Piles at the end of the game, the Diamonds cards you captured each count as two cards.

Jack: Rearrange your Grid however you like. You may not turn any cards face-up or facedown during this process.

Queen: flip up to three of your face-up cards facedown.

King: Mark each of your facedown numbers with a token. In whatever order you choose, reveal each marked card, and resolve combat with their opposing cards, one-by-one. Clubs and Hearts may use their Suit Powers where appropriate. Capture accordingly and replenish as you go.

Ace: Capture any other card in either grid, or the top card of the deck.

Remember that a face card must always be sacrificed after its ability is used.

To play a longer game of Doom Crop, use 2 or more decks. Shuffle them together, or give each player their own separate Draw Pile.

To play with more than 2 players, it's best to use multiple decks. When you reveal a number, you may choose which opponent's Grid in which you'll find its opposing card.

When you reveal, sacrifice, or capture a Joker, roll a 6-sided die and obey the table below:

1. Players swap Grids (or seats).
2. Activate the Face Ability of every face card in play, including facedown ones.
3. Each player sacrifices all of their own cards. Deal new Grids from the deck.
4. Each player collects their Grid, shuffles it, and deals it facedown randomly.
5. Players swap Discard Piles.
6. Flip the deck over. If it was facedown, now it is face-up, and vice-versa.

Include these Techniques in your game only if you truly believe you can withstand their power. Once per turn, before you take your action, you may reveal cards in your Grid to prove that one of the following conditions is true. If any of those cards were facedown, return them that way after activating your technique. Then, proceed with your turn as normal.

Doom Crop was written by Riley Adamson. This barebones version of the rules will remain available indefinitely. You may print this page and play at your pleasure.

A physical version of the game - Doom Crop Alpha was released in November 2022 with "House of Brain Dead" on the NTWRK app. It is now available to purchase online and at Brain Dead Fabrications in Silver Lake, California.